On December 2, 2013 Bojan Ambrožič reports on his website * about a new meteorite find in Slovenia. The meteorite was found by mountain hiker Božidar Jernej Malovrh at a picnic area about 50 meters southwest of the Czech mountain hut (Češka koča na Spodnjih Ravneh)* *² *³ at a height of 1543 meters above sea level (46°22’10.89″N, 14°32’8.92″E) in the Slovenian Karavanke mountains. 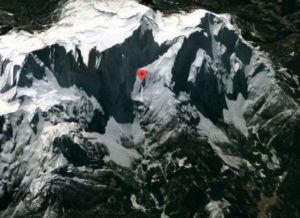 Find location in the Karavanke mountains.

Mr. Malovrh, his wife Vera, his son Mark and his girlfriend and later wife Tina had just arrived at the Czech Hut and had sat down at the picnic area nearby to have a rest when suddenly Malovrh noticed a ‘stone’ because of its unusual color, its interesting form with regmaglypts and a smooth surface. He observed the stone for some time and eventually picked it up. Immediately he noticed its unusually heavy weight. Furthermore he was intrigued because unlike the other stones lying around this stone was not embedded in the ground but lay on top of a layer of grass and moss. Furthermore it stood out because of its rusty brown surface which formed a stark contrast to the other brightly white rocks lying around. At home Božidar Jernej Malovrh noticed that the ‘stone’ was attracted to a magnet. On the day of his find he wrote down the exact date and time of his find on the surface of the stone. Today the inscription has faded away and is not visible anymore . Fortunately the finder kept a mountain diary in which he wrote down details about his hiking tour and the exact date of his find. It was the 13th September 1992. Božidar Jernej Malovrh stored the unusual stone on a shelf in his living room but later put the rock into his basement in need of more space for his books. Whenever holding the stone in his hand in the following years he could not decide to throw it away. On 12th November 2012 Mr. Malovrh visited the mineral and fossil collector Davorin Preisinger who suspected that the rock could in fact be a meteorite. Preisinger contacted Miha Jerška, the curator of the Slovenian Natural History Museum (SMNH), who on visual inspection confirmed that the rock was in fact a meteorite. The regmaglypted meteorite with its brownish-black fusion crust had to be officially classified. Initially the meteorite weighed 1380 gram. Before a slice of 73.5 gram, required as a type specimen for classification, was cut off the meteorite a cast of the meteorite was made by the Natural History Museum. The Jezersko meteorite was classified as an ordinary chondrite of type H4, with shock stage S5 and weathering grade W2. On 4th December 2013 Bojan Ambrožič, Dr. Miloš Miler, Prof. Breda Mirtič, Dr. Mateja Gosar, und Dr. Miha Jeršek * officially presented the new find in the Slovenian Natural History Museum (Prirodoslovni muzej Slovenije) *. The national Slovenian media hardly covered the story of this meteorite find. On 11th December 2013 the Slovenske Novice * reported about what Mr. Malovrh had written in his mountain diary:

Jezersko is only the fourth known meteorite find in Slovenia. On 14 January 2014 Jezersko was officially registered in the Meteoritical Bulletin database * of the Meteoritical Society. On 16th October 2014 the paper Mineral and chemical composition of the Jezersko meteorite—A new chondrite from Slovenia by Miler, M., Ambrožič, B., Mirtič, B., Gosar, M., Šturm, S., Dolenec, M. and Jeršek, M. was published in Meteoritics & Planetary Science*.