Rosa González Pérez and the secret stone of her childhood

The fall location in Ardón

It happened on the 9th of July 1931 at about 9.30 in the morning (local time) in a slightly sloping street in front of the wooden gate of the two-storey house with the number 9 in the Calle del Morrillo in the village Ardón (42°26’10.74″N, 5°33’42.58″W), which is situated about 18 km to the south of Léon in Spain. 11-year old Rosa González was told by her mother to take the lunch to her uncle Gregorio who was working in a wine cellar. It is said to have been an unusual day. Thunder rolling could be heard in the sky and an

unusually dark dust trail was noticeable, most likely in northeastern direction. According to Rosa González it did not sound like a typical thunder rolling. She herself describes it as: “Hacía ‘pas, pas’ y despedía como humo”. Furthermore she believes she heard a sound “como de un avión”, that sounded like an airplane. Having walked about 200 meters from her home Rosa apparently found shelter under a projecting roof covering the pavement to wait “que se pasó” until it would be over.Then she continued her walk and suddenly heard a clattering noise behind her on the street. She turned around and saw a little black stone on the street next to the kerb. First she thought someone had thrown the stone at her but could not see anybody. She picked up the 5.48-gram oval stone that was about 23 mm long and 16 mm broad and noticed that it was too hot to play with. She believed the stone could have been ejected from one of the chimneys of one of the houses around but could not see any in use. First she wanted to leave the stone behind but her curiosity made her keep the stone whose metal grains glittered temptingly inside the meteorite’s light grey matrix revealed by a small ‘window’ in the fusion crust. Rosa went to the wine cellar in which her uncle was working and showed him the stone, which according to Rosa was still so warm that she had to cool her hands at a bottle of wine to be able to hold the stone in her hand.

Most likely the exact fall location in the Calle del Morrillo. 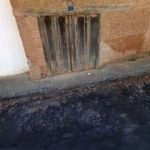 Most likely the exact fall location in the Calle del Morrillo.

Back at home in Calle el Cueto 21 (25) she showed the stone to her aunt and her mother who were said to have been impressed by it but were incapable of telling her what kind of stone it was. “Who do you think would throw a stone at you?”, they asked. Later neighbours were told about the stone. The next day priest Don Pedro came to visit the family and when he saw the stone he told Rosa that it had to be a meteorite. He said he had heard about the meteor on the radio. The dust trail in the sky had come from the ‘fire’ that one could have seen as a flame in the sky if it had happened during the night. Rosa put the stone in a little box in which it was stored together with old medallions and broken necklaces until about 2009 .

Already about three decades ago Rosa told her nephew José Antonio González about the story of her find. In 2013 José remembered the story because of what he had seen about meteorites in TV documentaries, among which were probably images of the Chelyabinsk meteorite. He thought that Rosa’s stone could be scientifically important. That is why he contacted Josep Maria Trigo and sent photos of the specimen.

In press reports from 1931 the bolide above Léon was described by eye-witnesses as follows:
According to a teacher the bolide passed with a “tableteo fuerte seguido de seis u ocho truenos empalmados”, a rattling or clacking with six or eight subsequent thunderclaps. Others described the bolide high in the sky as “una llama ardiendo y rugiendo y echando humo”, a burning, roaring and smoking flame.

More than one gram of the meteorite was donated to the Museo Nacional de Ciencias Naturales. A fragment of 0.3 grams will be on public display in the meteorite room of the Museo Nacional de Ciencias Naturales. In addition, there will be a replica of the whole meteorite. The remaining mass of 3.528 grams was returned to the Gonzáles family who considers giving the specimen to another museum possibly in Ardón or León.

Abstract We report and describe an L6 ordinary chondrite fall that occurred in Ardón, León province, Spain (longitude 5.5605°W, latitude 42.4364°N) on July 9th, 1931. The 5.5 g single stone was kept hidden for 83 yr by Rosa González Pérez, at the time an 11 yr old who had observed the fall and had recovered the meteorite. According to various newspaper reports, the event was widely observed in Northern Spain. Ardón is a very well-preserved, fresh, strongly metamorphosed (petrologic type 6), and weakly shocked (S3) ordinary chondrite with well-equilibrated and recrystallized minerals. The mineral compositions (olivine Fa23.7±0.3, low-Ca pyroxene Fs20.4±0.2Wo1.5±0.2, plagioclase An10.3±0.5Ab84.3±1.2), magnetic susceptibility (log χ = 4.95 ± 0.05 × 10−9 m3 kg−1), bulk density (3.49 ± 0.05 g cm−3), grain density (3.58 ± 0.05 g cm−3), and porosity (2.5 vol%) are typical for L6 chondrites. Short-lived radionuclides confirm that the meteorite constitutes a recent fall. The 21Ne and 38Ar cosmic ray exposure ages are both about 20–30 Ma, similar to values for many other L chondrites. The cosmogenic 22Ne/21Ne ratio indicates that preatmospheric Ardón was a relatively large body. The fact that the meteorite was hidden in private hands for 83 yr makes one wonder if other meteorite falls may have experienced the same fate, thus possibly explaining the anomalously low number of falls reported in continental Spain in the 20th century.