“The ranges in chemical composition of ancient achondrite meteorites are key to understanding the diversity and geochemical evolution of planetary building blocks. These achondrites record the first episodes of volcanism and crust formation, the majority of which are basaltic. Here we report data on recently discovered volcanic meteorite Northwest Africa (NWA) 11119, which represents the first, and oldest, silica-rich (andesitic to dacitic) porphyritic extrusive crustal rock with an Al–Mg age of 4564.8 ± 0.3 Ma. This unique rock contains mm-sized vesicles/cavities and phenocrysts that are surrounded by quench melt. Additionally, it possesses the highest modal abundance (30 vol%) of free silica (i.e., tridymite) compared to all known meteorites. NWA 11119 substantially widens the range of volcanic rock compositions produced within the first 2.5–3.5 million years of Solar System history, and provides direct evidence that chemically evolved crustal rocks were forming on planetesimals prior to the assembly of the terrestrial planets.” 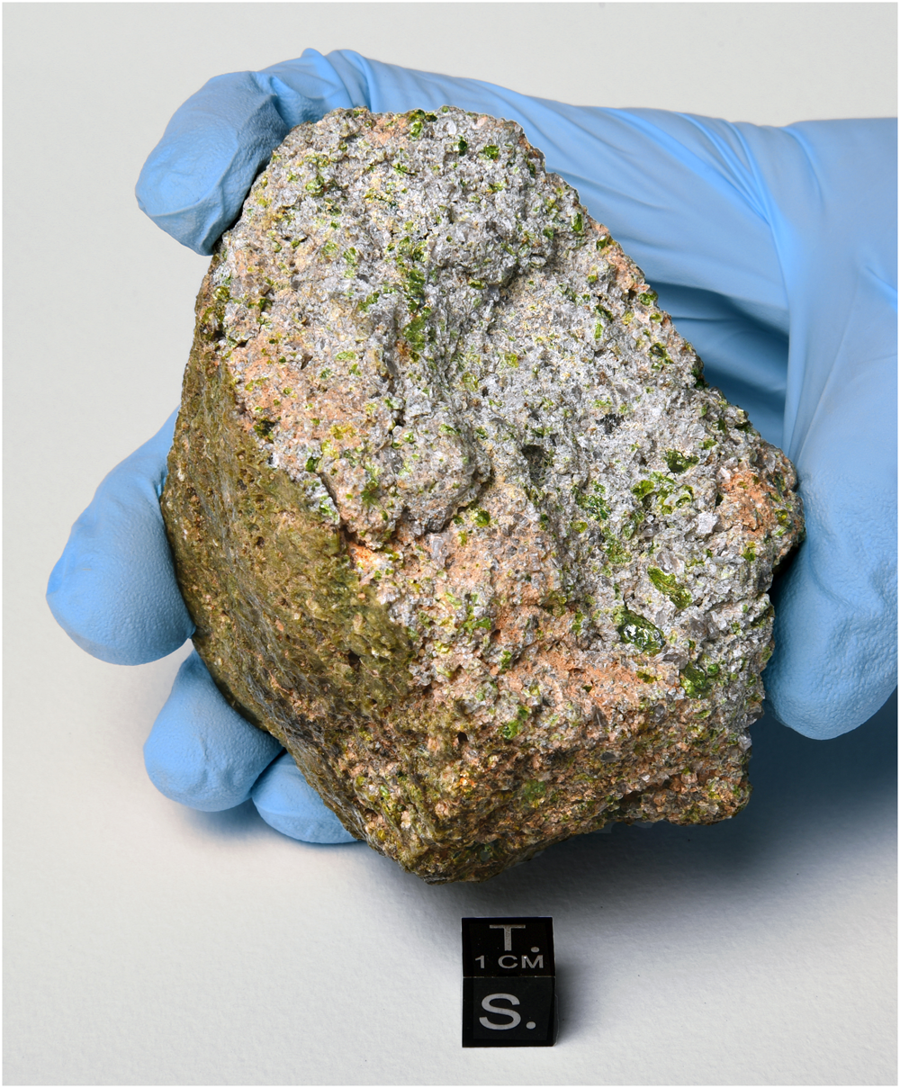 Photograph of the main mass of NWA 11119 that was found in Mauritania in December 2016. The rock has a light-green fusion crust, and the broken interior shows light-green and gray-colored crystals. Photo credit: © 2017 B. Barrett/Maine Mineral & Gem Museum 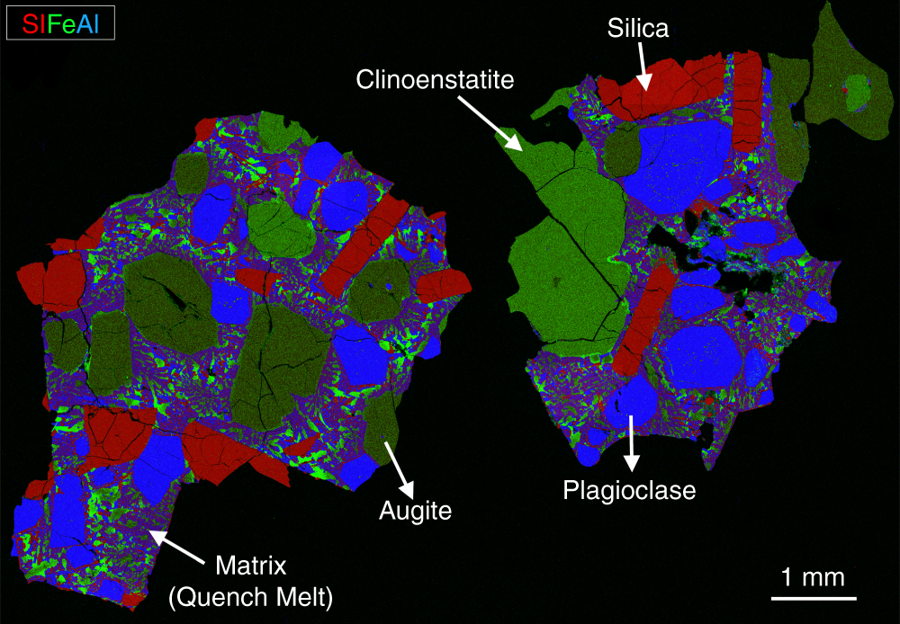 False-colored X-ray map of NWA 11119 showing mm-sized phenocrysts of silica, clinoenstatite, augite, and plagioclase. Zoning was not observed in silica or pyroxene phenocrysts, but normal zoning appears in plagioclase phenocrysts. The phenocrysts are surrounded by quenched groundmass consisting of highly zoned crystals that range in size from submicrometer to hundreds of micrometers. Photo: Srinivasan et al. 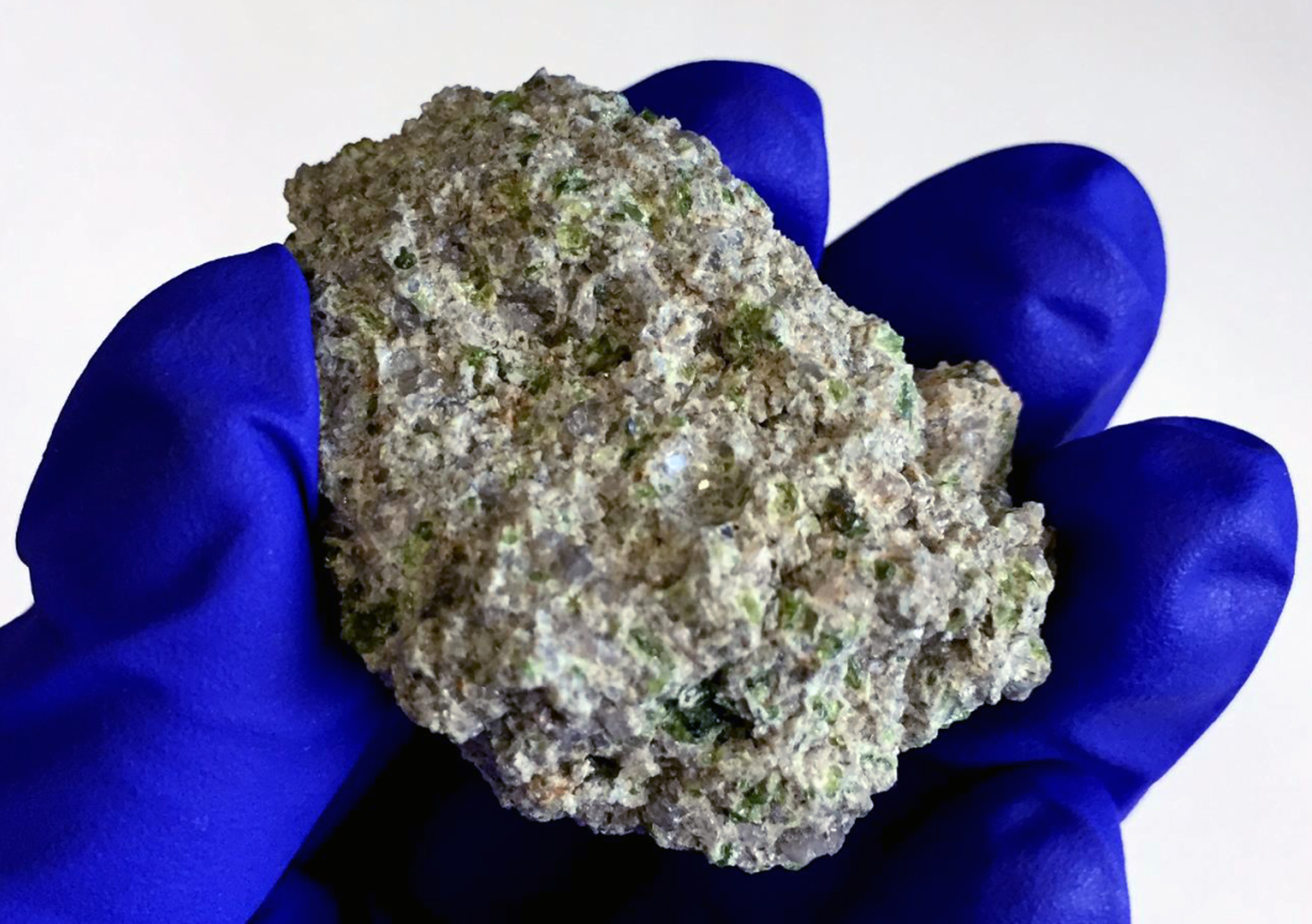 Supplementary Figure 1. Photograph of the NWA 11119 deposit sample at the Institute of
Meteoritics (UNM). Green is Cr-rich pyroxene, grey is silica polymorph, and white is plagioclase.
Note spherical cavity in the center of the image. Photo: Srinivasan et al.

“Examples of ancient igneous activity on planetesimals within a few million years of Solar System formation (assumed to coincide with the formation of the first refractory solids in the solar protoplanetary disk30,31,32) are dominated by samples that exhibit basaltic–ultramafic bulk rock compositions. For example, internal Pb–Pb and 26Al–26Mg isochrons for both the angrite D’Orbigny, which contains vesicles and glass-filled cavities, and the cumulate eucrite Asuka 881394, which has a granulitic texture, indicate that basaltic crusts formed on their distinct differentiated parent bodies well within ~5 Ma of Solar System formation27,28,33,34. Additionally, internal Pb–Pb and 26Al–26Mg isochrons for the ungrouped achondrite NWA 7325 provide evidence that basaltic crusts were forming on a reduced, differentiated parent body by ~4563 Ma21,35,36. Geochronologic data for the recently discovered volcanic and subvolcanic meteorites with rare trachyandesitic compositions are somewhat limited but provide some evidence that their parent bodies also differentiated early. The 26Al–26Mg model age for the ungrouped trachyandesitic paired achondrites GRA 06128/91,37,38 suggests that differentiation and plagioclase accumulation on the oxidized, volatile-rich, differentiated body may have occurred as early as ~4565 Ma38. Similarly, a 26Al–26Mg model age for the trachyandesitic fragment, ALM-A, from the anomalous polymict ureilite Almahata Sitta indicates that evolved crusts may have formed on a volatile-rich, differentiated body by ~4561 Ma3. The bulk composition of NWA 11119, along with its early formation age as indicated by its 26Al–26Mg internal isochron, demonstrates unambiguously that andesitic–dacitic volcanism occurred on a differentiated parent body within the first 2.5–3.5 Ma of Solar System history, extending both the age and degree of chemical evolution of planetary crustal materials on differentiated bodies in our Solar System.

NWA 11119 shares a number of textural and geochemical similarities with other ancient volcanic achondrites. For example, NWA 11119 has textural similarities to D’Orbigny and other angrites (e.g., vesicles), but it shares isotopic and petrologic links to the achondrites NWA 7325 and ALM-A in regard to oxygen isotopes (Fig. 4) and the presence of Cr-bearing high-Ca pyroxene 3,21. NWA 11119 also shares similarities in whole-rock REE abundances with the ALM-A fragment (Fig. 3c). Nevertheless, NWA 11119 has other petrologic and geochemical distinctions (e.g., high free silica content and low total alkali content) that make it a unique crustal rock compared to these samples. Figure 3a shows the bulk rock content of NWA 11119 compared to the isotopically similar NWA 7325 39 and ALM-A3 samples, and the trachyandesitic GRA 06128/91 samples. Although NWA 11119 shows notable geochemical similarities to NWA 7325 and ALM-A, it possesses a distinct bulk rock composition compared to these two samples. Furthermore, the bulk rock composition and pyroxene compositions of NWA 11119 have distinct Fe/Mn ratios compared to NWA 7325 and ALM-A (Supplementary Fig. 5), indicating that NWA 11119 is an andesitic achondrite that may be derived from a previously unsampled parent body.

The formation mechanisms of andesitic crustal materials are highly debated4,40,41. On Earth, ideas range from formation as primary melts from mantle material to secondary products of basaltic partial melts40. Plate tectonics and mantle volatile contents are also thought to play significant roles in the production of andesitic crusts4,41. The formation mechanisms of andesitic materials in asteroidal bodies are more uncertain, and it is still an area of intense research. Melting of chondritic precursors are typically implicated in the formation of achondrites, and the relatively unfractionated REE pattern of the NWA 11119 whole rock (Fig. 3c) is consistent with such a scenario. However, the petrogenetic origin of NWA 11119 cannot be easily linked to known melting processes of chondritic precursor materials. Nevertheless, several experimental studies on partial melting of chondritic materials have reported the formation of evolved melt compositions similar to the SiO2 content of NWA 1111942,43,44,45. These studies may provide insights into the melting processes that occurred to produce NWA 11119.

The EH4, H, and R4 experimental studies highlight the two mechanisms for producing silica-rich melts through equilibrium partial melting of chondritic precursor materials: (1) reducing to highly reducing conditions (akin to the H and EH4 studies) promote SiO2 enrichment in the lithic fraction by sequestration of Fe in the metallic fraction (as long as the system remains above the oxygen fugacity defined by Si–SiO2), and (2) even precursor materials with abundant olivine will produce Si-rich melts under low-degree partial melting if melting occurs at a eutectic involving albitic plagioclase (akin to the R4 study44). Both of these mechanisms were used to explain the enigmatic origin of extensive boninitic magmatism on the planet Mercury46. Although mechanism 2 cannot be used to explain the origin of NWA 11119 given its alkali-depleted bulk composition, mechanism 1 may apply to NWA 11119 given that its bulk composition has FeO abundances that are intermediate between the melts produced in the EH4 and H experimental studies. This intermediate FeO abundance indicates that NWA 11119 could have been derived by partial melting of a chondritic precursor at an fO2 that is intermediate between the fO2 investigated in the H and EH4 studies (IW-1 and IW-5, respectively). In fact, if the FeO abundance of NWA 11119 is reflective of the FeO abundance of its source, it would imply an fO2 of approximately IW-4, if its source was in equilibrium with Fe-rich metal (computed using the methods outlined in ref.47). Partial melting studies of chondritic materials between IW-1 and IW-5 are lacking, but future studies aimed at this range in fO2 may provide important constraints into the origin of NWA 11119, the origin of other evolved and reduced asteroidal samples, and the origin of reduced planetary bodies such as Mercury48. NWA 11119 provides the first unambiguous evidence for evolved volcanism in the earliest stages of Solar System history, prior to the assembly of the terrestrial planets.”

Supplementary Movie 1
A 360° CT scan of the vesicle/cavity content in the NWA 11119 deposit sample, which we have determined to be 1.2 vol.%.

Supplementary Movie 2
A CT scan video segmenting the Z-axis of the deposit sample showing the differences in mineralogy of NWA 11119 (color legend: silica in red, pyroxene in yellow, plagioclase in blue, oxides in white).