accepted in Planetary and Space Science

“Superbolides, i.e. extremely bright meteors produced by entries of meter-sized bodies into terrestrial atmosphere, are rare events. We present here detailed analysis of a superbolide, which occurred over Romania on January 7, 2015. The trajectory, velocity, and orbit were determined using two all-sky photographs from a station of the European Fireball Network (EN) in Slovakia and five casual video records from Romania, which were carefully calibrated. Bolide light curve was measured by EN radiometers. We found that the entry speed was 27.76 $\pm$ 0.19 km/s, significantly lower than reported by US Government sensors. The orbit was asteroidal with low inclination and aphelion inside Jupiter’s orbit. The atmospheric behavior was, however, not typical for an asteroidal body. The peak brightness of absolute magnitude of -21 was reached at a quite large height of 42.8 km and the brightness then decreased quickly. The bolide almost disappeared at a height of 38.7 km, leaving just a stationary luminous trail visible for several seconds. Only one small fragment continued until the height of 36 km. Brief meteorite searches were unsuccessful. The modeling of the light curve revealed that the body of initial mass of about 4500 kg remained almost intact until the dynamic pressure reached 0.9 MPa but it was then quickly disintegrated into many tiny fragments and dust under 1-3 MPa. A comparison was made with three other superbolides for which we have radiometric light curves: ordinary chondrite fall Ko\v{s}ice, carbonaceous chondrite fall Maribo, and cometary Taurid bolide of October 31, 2015. The Romanian superbolide was not similar to any of these and represents probably a new type of material with intrinsic strength of about 1 MPa. ” 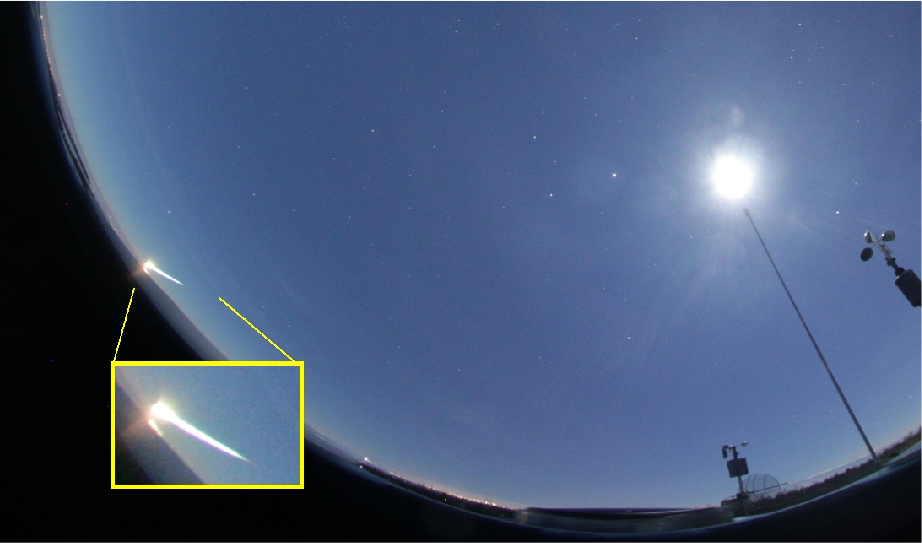 An excerpt of the all-sky image taken by the autonomous Fireball Observatory in Stará Lesná, Slovakia, showing the superbolide above the south-eastern horizon.