“Carbonaceous asteroids may have been the precursors to the terrestrial planets, yet despite their importance, numerous attempts to model their early solar system geological history have not converged on a solution. The assumption has been that hydrothermal alteration was occurring in rocky asteroids with material properties similar to meteorites. However, these bodies would have accreted as a high-porosity aggregate of igneous clasts (chondrules) and fine-grained primordial dust, with ice filling much of the pore space. Short-lived radionuclides melted the ice, and aqueous alteration of anhydrous minerals followed. However, at the moment when the ice melted, no geological process had acted to lithify this material. It would have been a mud, rather than a rock. We tested the effect of removing the assumption of lithification. We find that if the body accretes unsorted chondrules, then large-scale mud convection is capable of producing a size-sorted chondrule population (if the body accretes an aerodynamically sorted chondrule population, then no further sorting occurs). Mud convection both moderates internal temperature and reduces variation in temperature throughout the object. As the system is thoroughly mixed, soluble elements are not fractionated, preserving primitive chemistry. Isotopic and redox heterogeneity in secondary phases over short length scales is expected, as individual particles experience a range of temperature and water-rock histories until they are brought together in their final configuration at the end of convection. These results are consistent with observations from aqueously altered meteorites (CI and CM chondrites) and spectra of primitive asteroids. The “mudball” model appears to be a general solution: Bodies spanning a ×1000 mass range show similar behavior.” 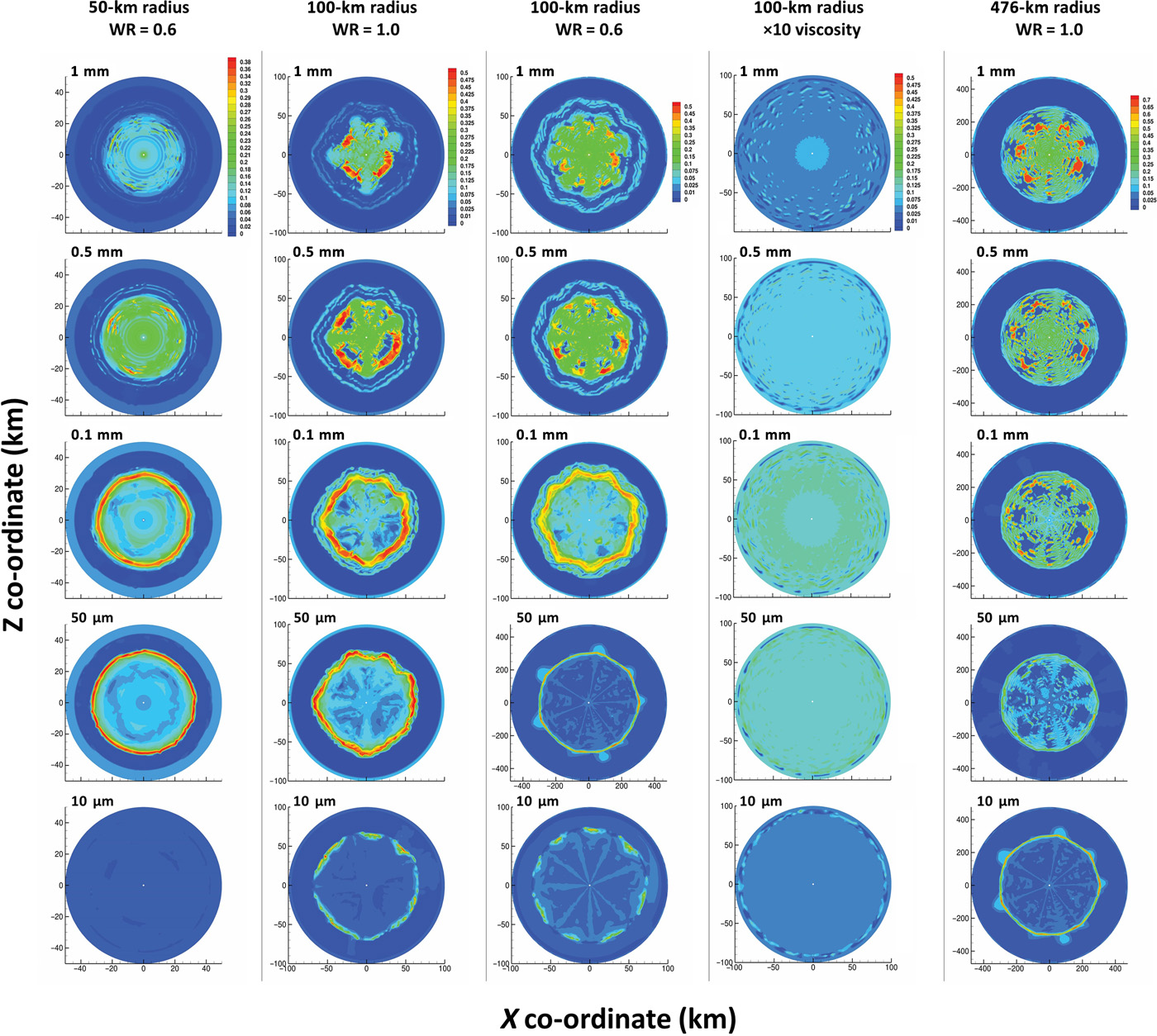 Fig. 1 Particle size distribution in sample model asteroids that accrete a range of chondrule sizes, showing the variety of chondrule sorting [note: if the object accretes a sorted population (the current canonical view), then no additional sorting will occur].

It is apparent that asteroid radius (lower-gravity objects show less efficient sorting), mud viscosity, and WR ratio (which also influences viscosity) affect sorting. Other factors include chondrule packing density and accretion time (objects that accrete earlier show stronger convection and more efficient sorting). In scenarios where sorting occurs, we typically see an inner core region dominated by 1- and 0.5-mm chondrules, surrounded by 0.1-mm particles, with 50-μm particles concentrated at the edge of the core and 10-μm particles distributed evenly either throughout the object or at the core-mantle boundary. Mud convection complicates this picture, with particles depleted in upwelling regions and concentrated relative to the average in downwelling regions. Particle oscillations reflect a feedback between fluid flow and particle transport. Objects with ×10 higher viscosity show no sorting (although convection still occurs).

Fig. 2 Visualizing individual particle trajectories (dimensionless tracer particles scattered throughout the mud) in a 100-km-radius object accreting at CAI + 3 My with WR = 1.0.

The figure shows the range of tracer particle histories for all latitudinal coordinates at a given level in the model asteroid, for particles beginning at a level of 20 km (A), 50 km (B), and 80 km (C). We see the effect of convection strengthening over time; until by 2 My, mud convection is transporting tracer particles that started at all three levels through the entire object—from the core up to the base of the ice lid.

Fig. 3 Temperatures in various model asteroids at a similar stage in their evolution following the onset of convection.

Fig. 4 Visualizing individual tracer particle histories in a 100-km-radius object accreting at CAI + 3 My with WR = 1.0.

The figure shows particle histories for all latitudinal coordinates at a given level in the model asteroid over time. There is significant range in particle T-t and WR-t trajectories: Compositional and isotopic heterogeneity over short length scales at the end of convection is expected. (A and B) Range of T-t histories for particles starting at 60 and 90 km (respectively) in our model asteroid. Although mud convection moderates temperature, there are significant excursions, particularly at early times. (C and D) Range of WR histories for particles starting at 70 and 90 km (respectively). The main modification in WR is global serpentinization at 0.9 My. However, as mud convection strengthens, strong upwelling degrades portions of the ice lid, leading to transient spikes in WR at these levels in the model asteroid. The result when convection ceases, and the arrangement of grains is locked in (perhaps approximating what we see in the meteorite), will be a material with significant grain-grain variability over short (100 μm) length scales in grain T-t and WR-t histories. This variability will be increased if secondary mineral growth occurs continually during alteration, while the whole body cools (not accounted for in our model).