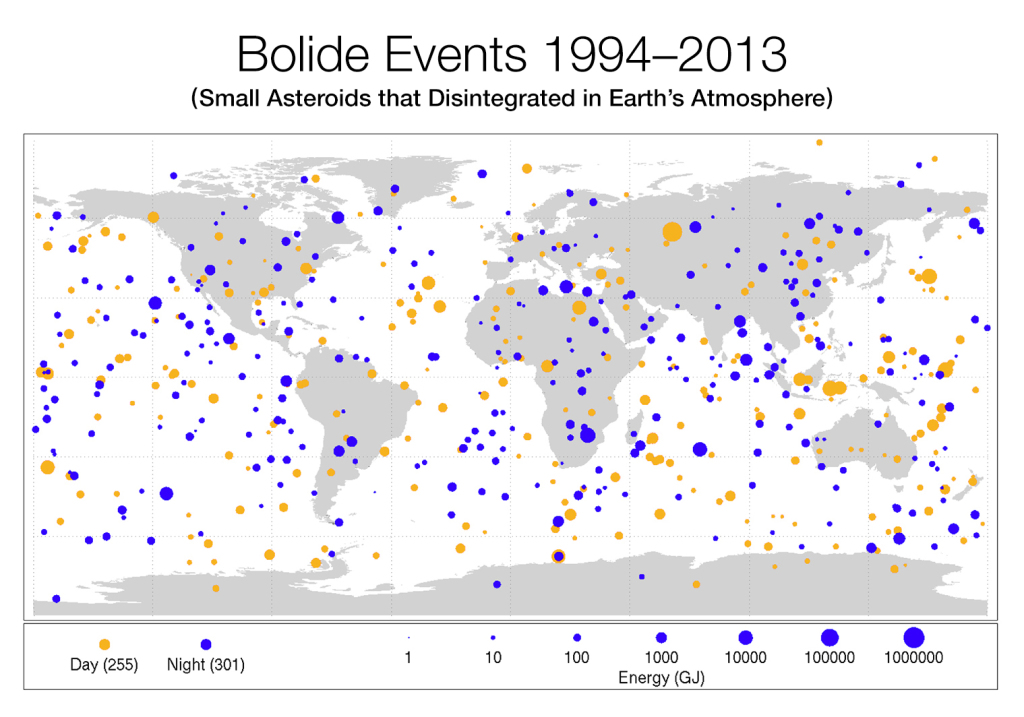 IMAGE: This diagram maps the data gathered from 1994-2013 on small asteroids impacting Earth’s atmosphere to create very bright meteors, technically called “bolides” and commonly referred to as “fireballs”. Sizes of red dots (daytime impacts) and blue dots (nighttime impacts) are proportional to the optical radiated energy of impacts measured in billions of Joules (GJ) of energy, and show the location of impacts from objects about 1 meter (3 feet) to almost 20 meters (60 feet) in size. DESCRIPTION: A map released today by NASA’s Near Earth Object (NEO) Program reveals that small asteroids frequently enter and disintegrate in the Earth’s atmosphere with random distribution around the globe. Released to the scientific community, the map visualizes data gathered by U.S. government sensors from 1994 to 2013. The data indicate that Earth’s atmosphere was impacted by small asteroids, resulting in a bolide (or fireball), on 556 separate occasions in a 20-year period. Almost all asteroids of this size disintegrate in the atmosphere and are usually harmless. The notable exception was the Chelyabinsk event which was the largest asteroid to hit Earth in this period. The new data could help scientists better refine estimates of the distribution of the sizes of NEOs including larger ones that could pose a danger to Earth.