After a week of bad weather and two days of searching the team has found two meteorites near the Osechka mountains (71.549°S, 15.489°E) according to Victor Grokhovsky from UrFU university. One specimen has a diameter of about 5 cm, the second one’s is about 3 cm. The first meteorite (H3, 12.5 g) Lomonosov 15001 was found by Sergei Malagamba (Сергей Малагамба) at location 71°33’0.4″S, 15°30’30.2″E on December 30, 2015, the second one Lomonosov 15002 (monomict Eucrite, 118 g) by Alexander Pastuhovich (Александр Пастухович) at location 71°33’0.6″S, 15°30’30.2″E on January 1, 2016. The team had to stop their search on January 5 because of another Antarctic storm coming up. As announced by UrFU university on January 9 the team had finished its meteorite search expedition 2015/16 and had been transported back to Novolazarevskaya station via IL-76 plane. On January 10 the team members arrived in Cape Town and after a short stay including a ‘press conference’ on a runway of Domodedovo Moscow Airport * on January 15 they arrived back in Yekaterinburg. About 300 rocks or ‘potential meteorites’ with a total weight of about 30 kg have been collected and sent from Novolazarevskaya station to UrFU university for analysis. The rocks arrived in Saint Petersburg by ship on May 31, 2016 and reached Yekaterinburg on June 15, 2016. On January 18, 2016 the two found meteorites (LOM 15001, an H3.6 chondrite (12.5 g, S2/W1) and LOM 15002, a monomict eucrite breccia (118 g, weathering grade B) were presented in a press conference at UrFU University. Lomonosov 15001 and Lomonosov 15002 were added to the Meteoritical Bulletin database on 10 April 2021. Furthermore it was initially announced that a potential future meteorite search expedition (four were planned until 2020) might be organized in cooperation with India. 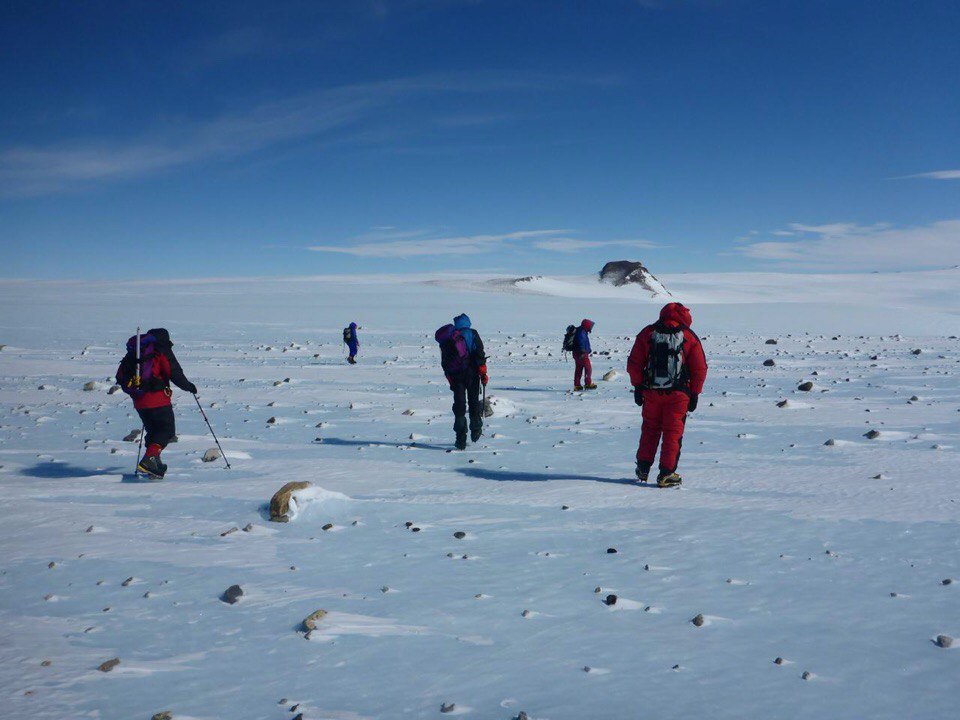 The team is searching for meteorites walking up to 20 km a day. / photo: UrFU 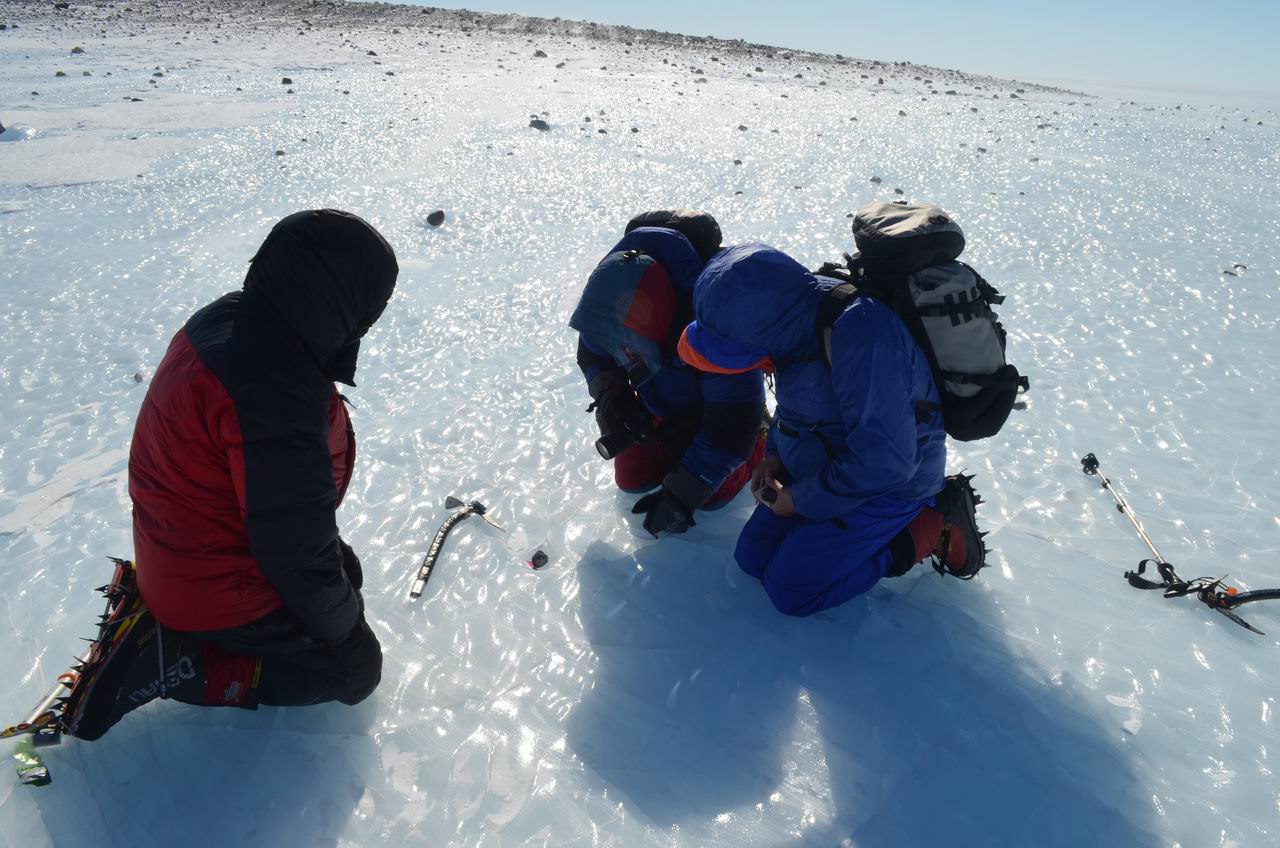 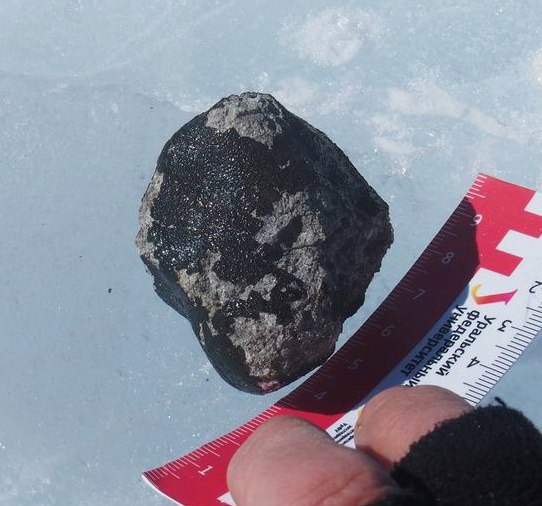 Alexander Pastuhovich (Александр Пастухович) posing next to the eucrite LOM 15002 (in situ) which he found on January 1, 2016 / photo: UrFU 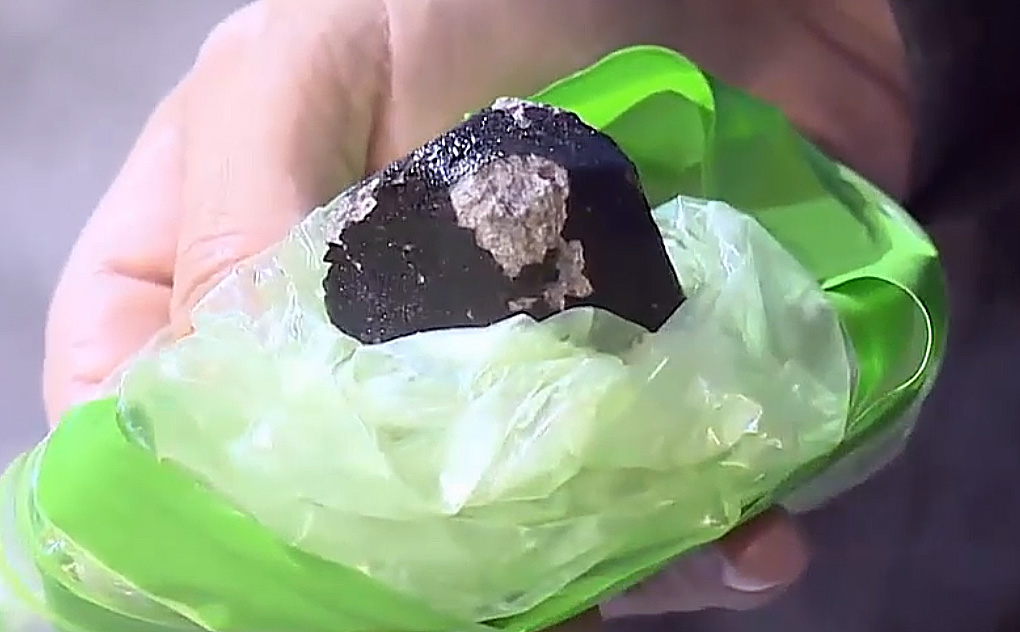 LOM 15002, the second Antarctic find of the UrFU expedition on January 1, 2016. The picture was taken when it was presented to the press at Domodedovo Moscow Airport on January 15, 2016 / credit: gazeta.ru 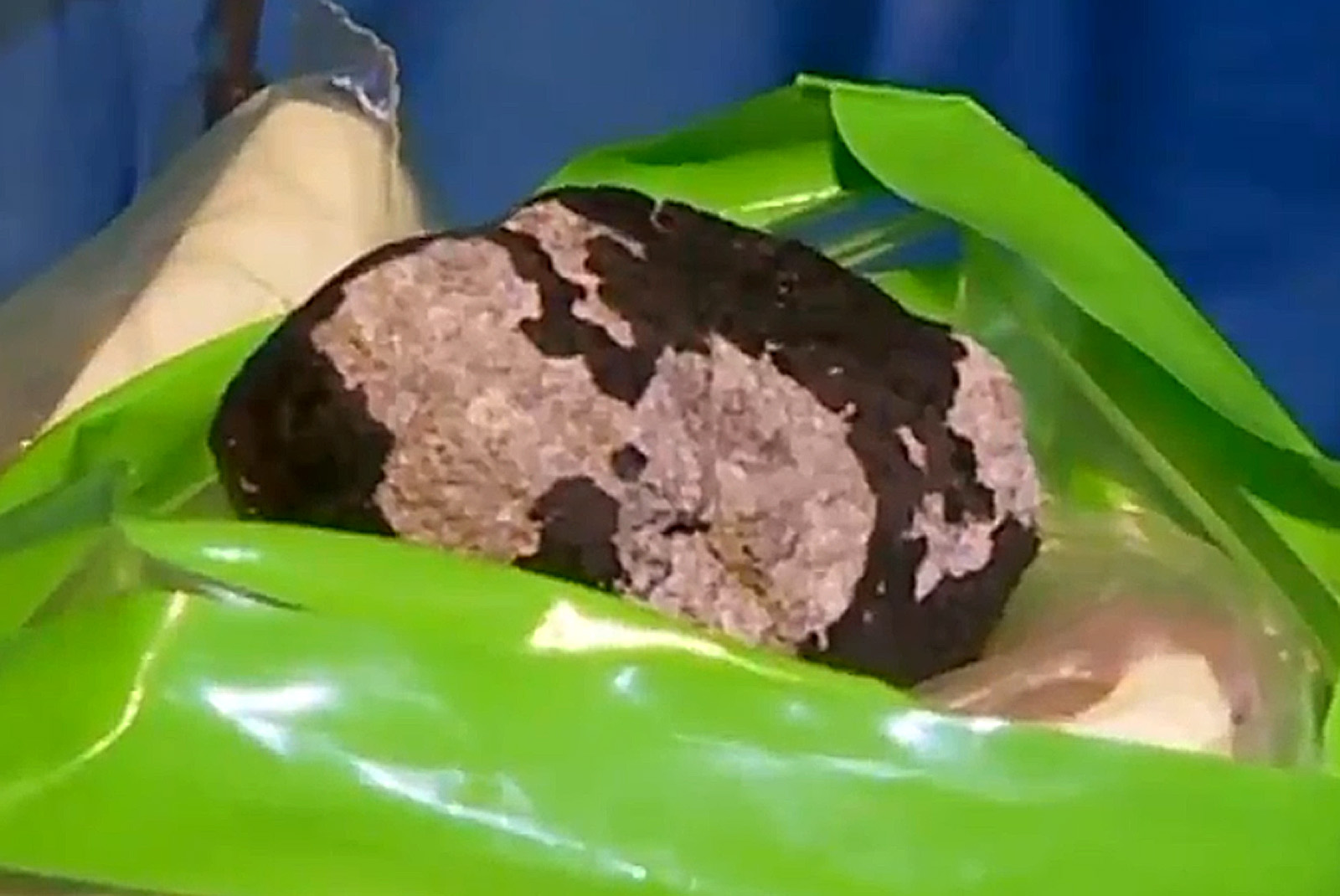 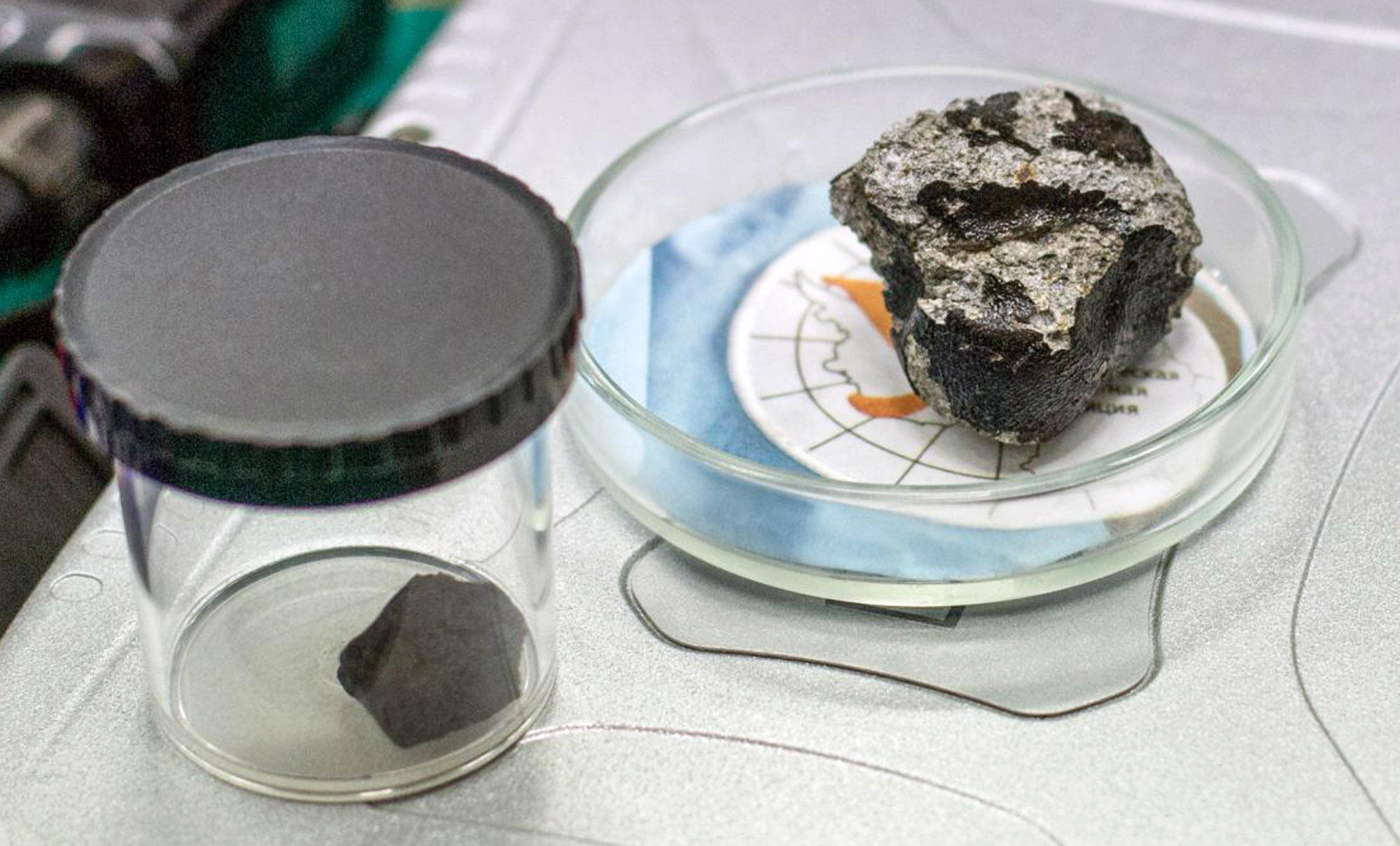 The two meteorites at a press conference at UrFU university on January 18, 2016 / image: Ilya Safarov 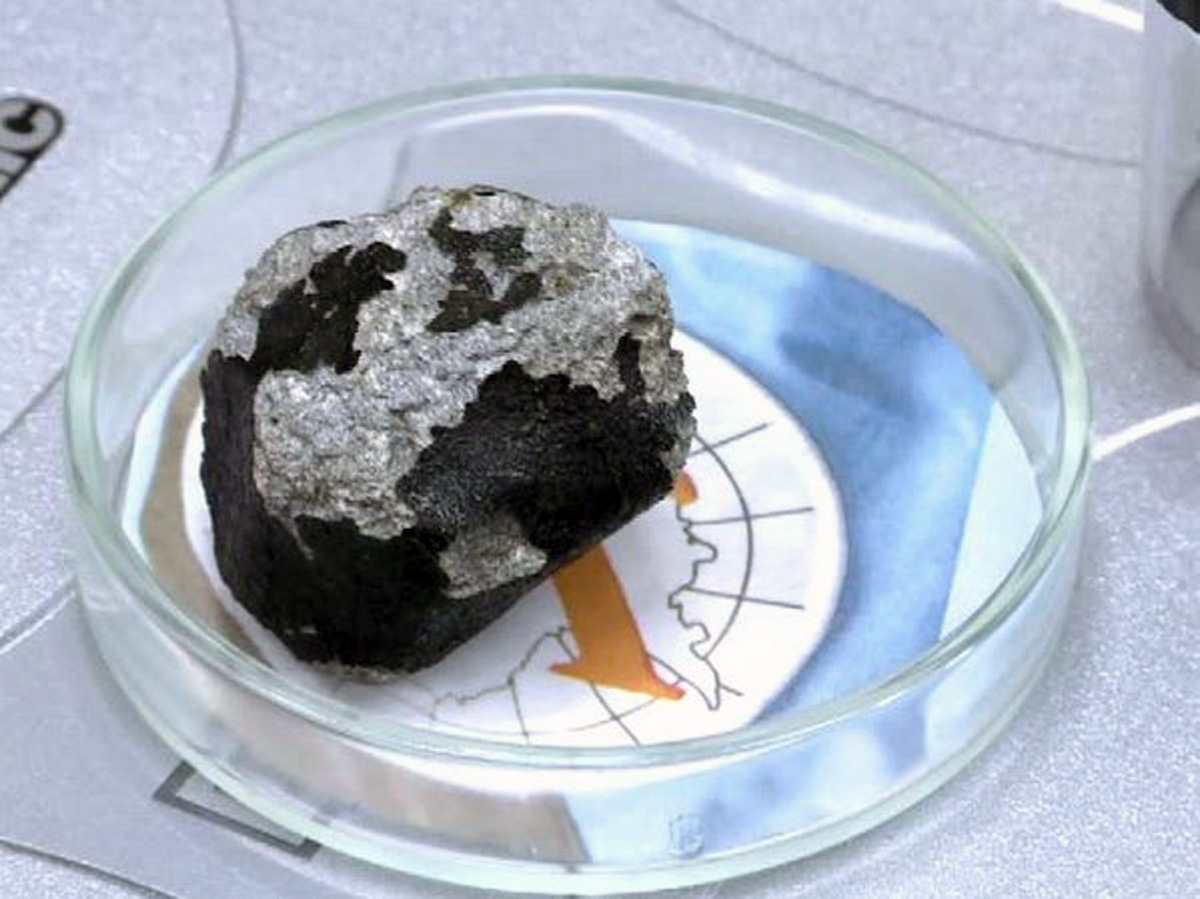 The second meteorite at its presentation at UrFU university on January 18, 2016 / image: obl.tv 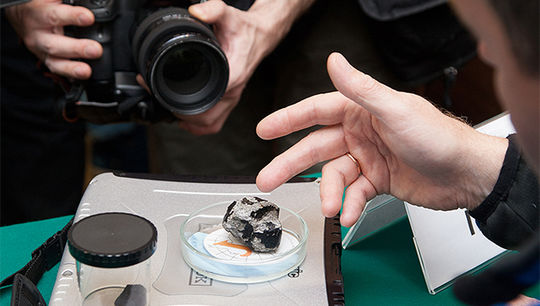 The meteorite at its presentation at UrFU university on January 18, 2016 / image: Alexander Hlopotova 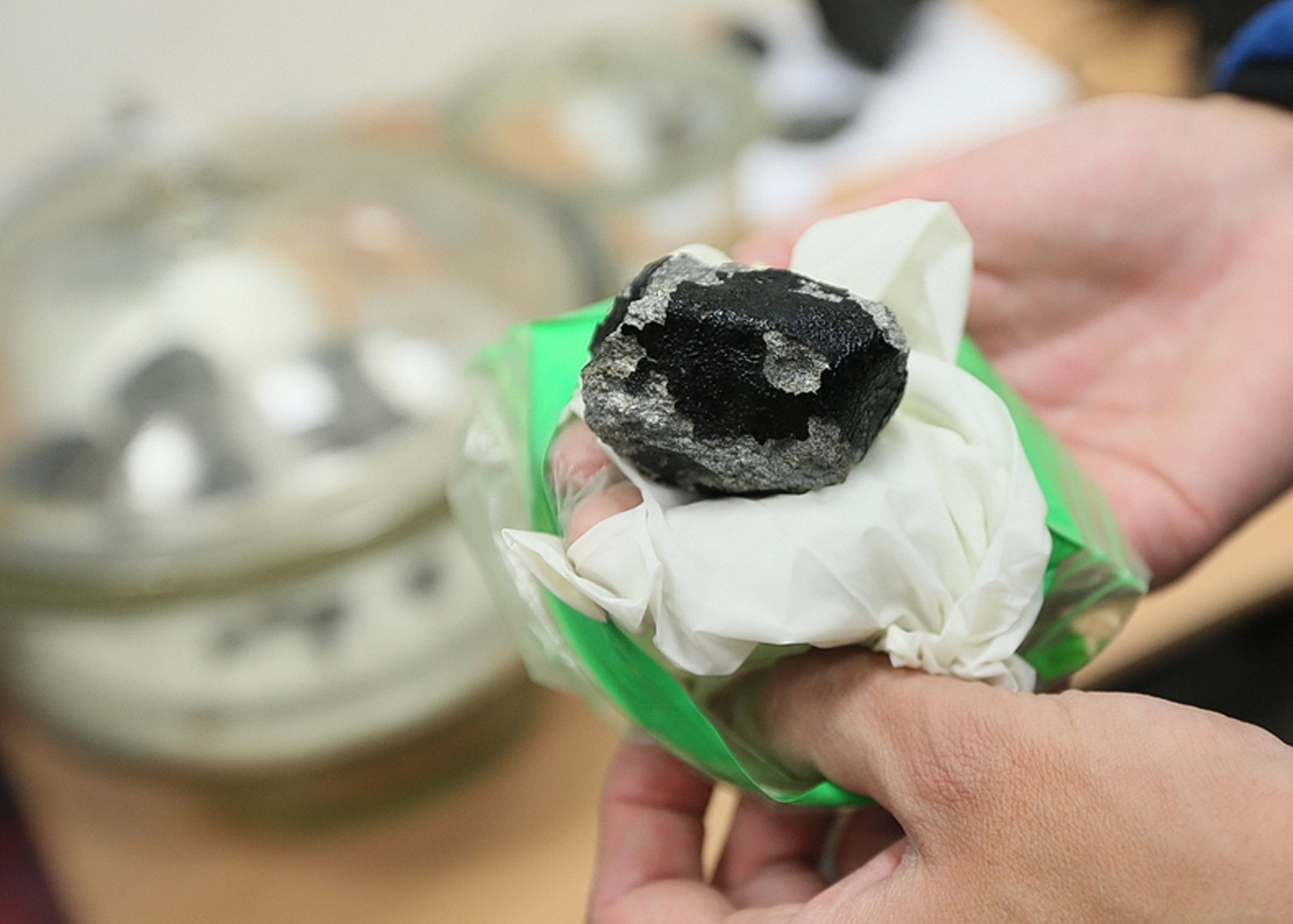 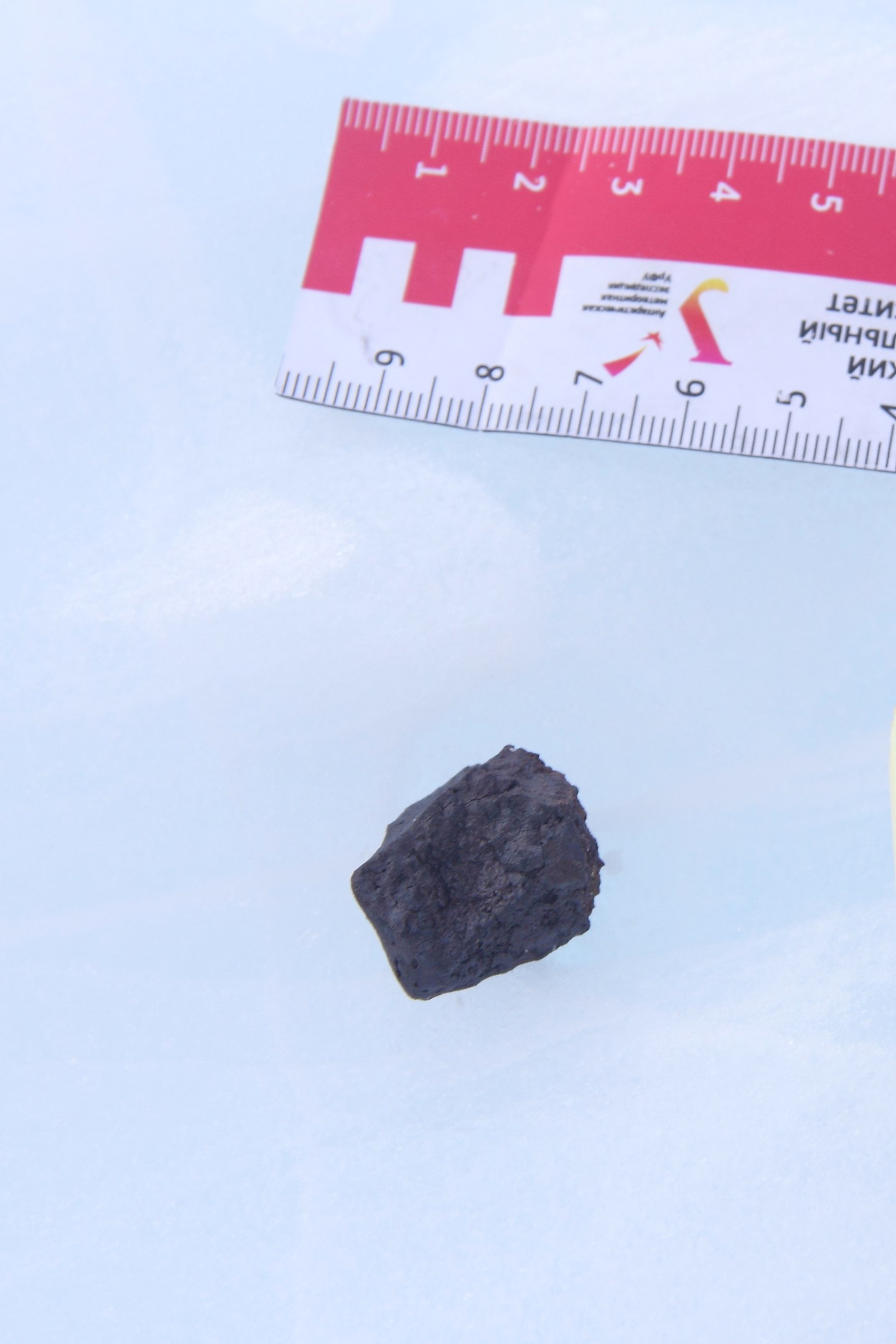 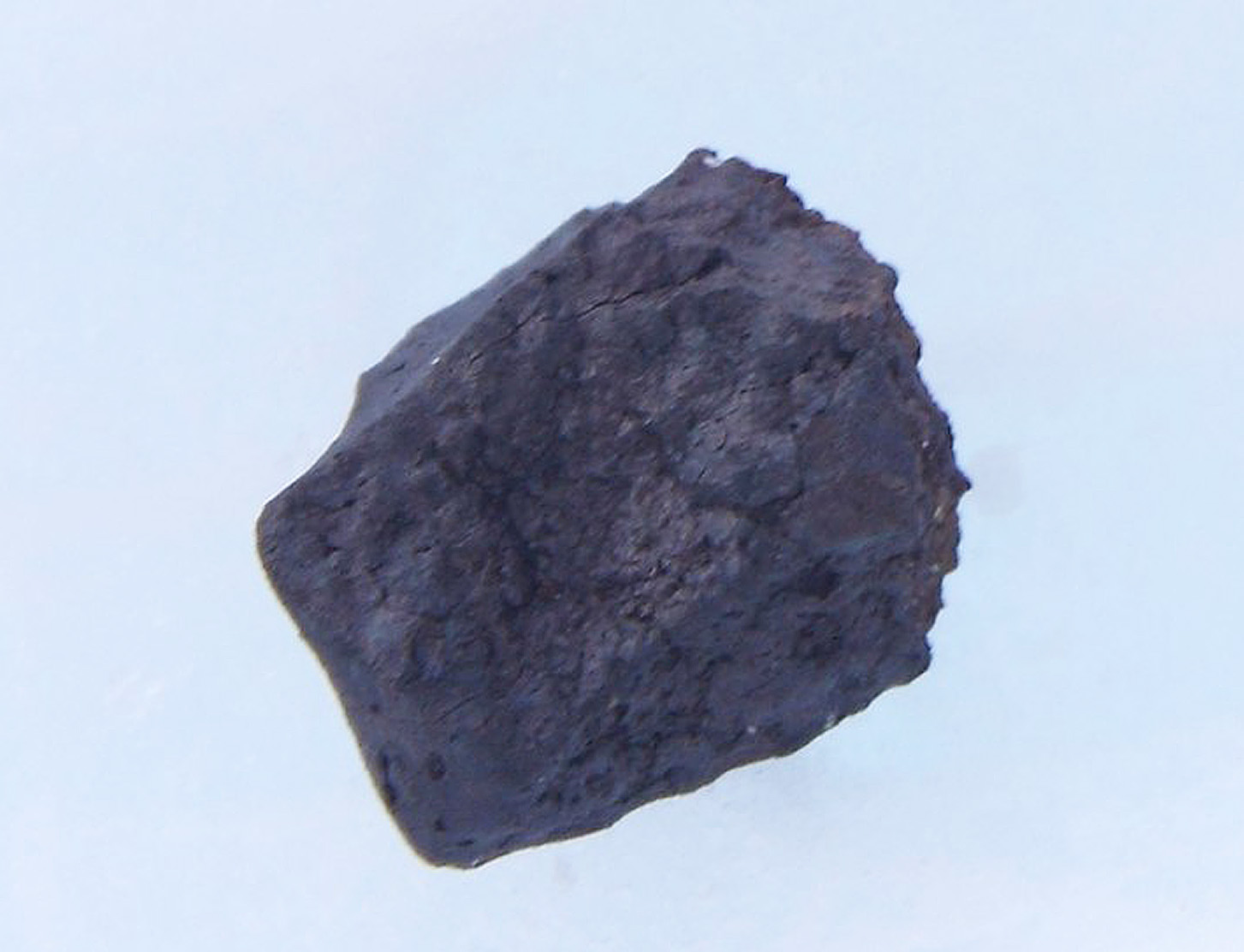 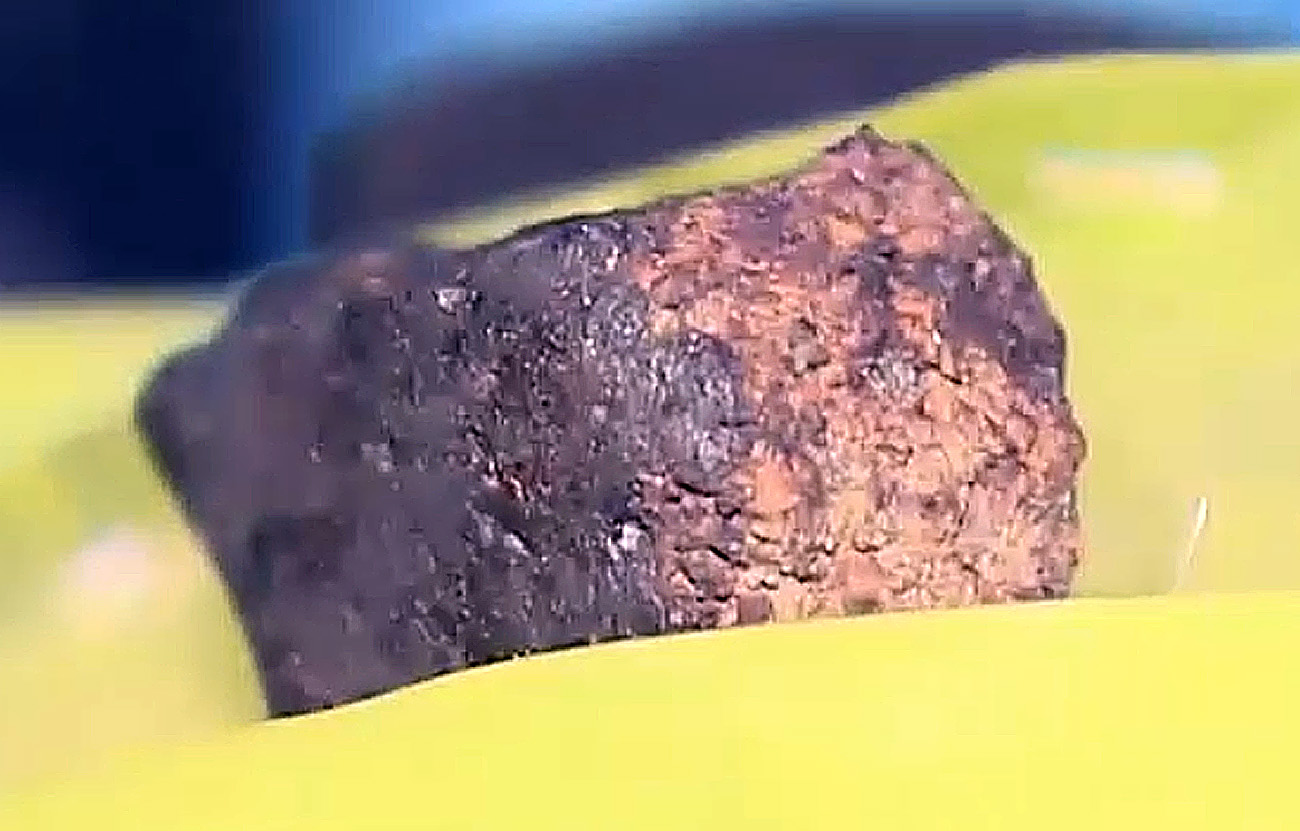 Close-up of LOM 15001, the first Antarctic find of the UrFU expedition on December 30, 2015. The picture was taken when it was presented to the press at Domodedovo Moscow Airport on January 15, 2016 / credit: gazeta.ru 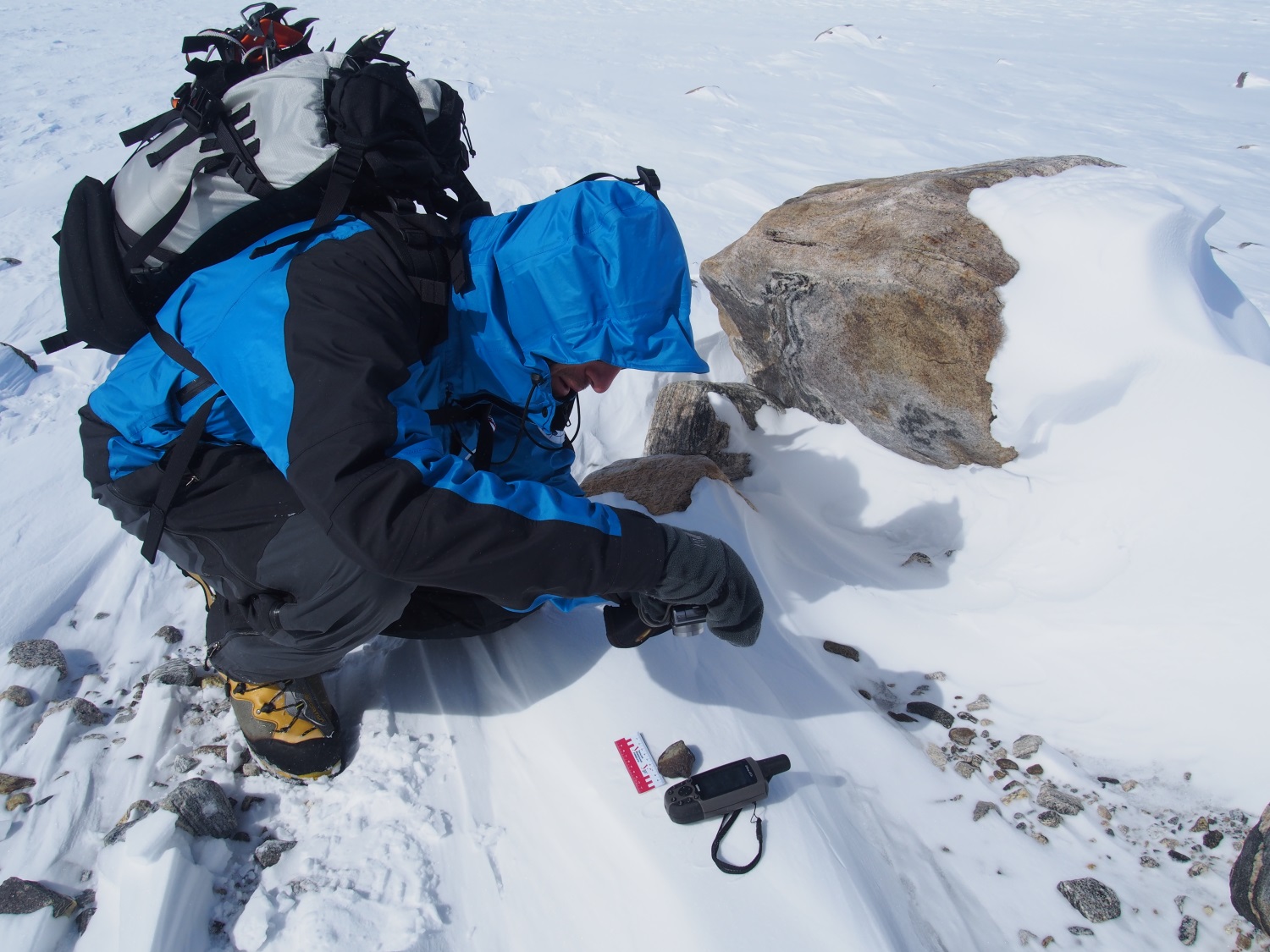 Documenting the size and find location of a specimen with a digital camera. /image credit: business-class.su 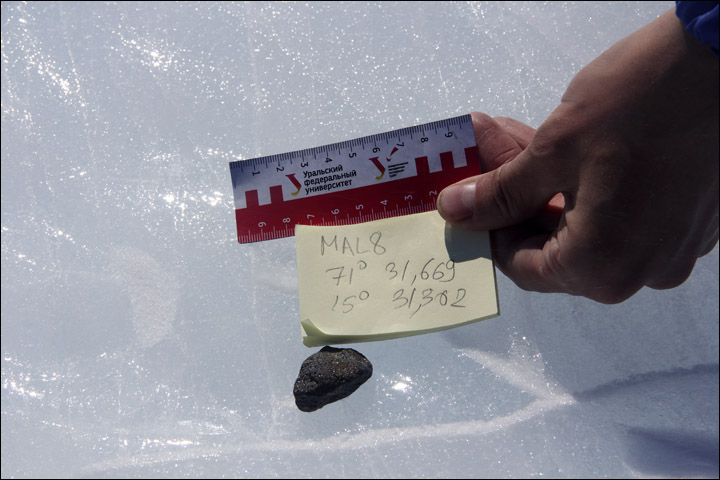 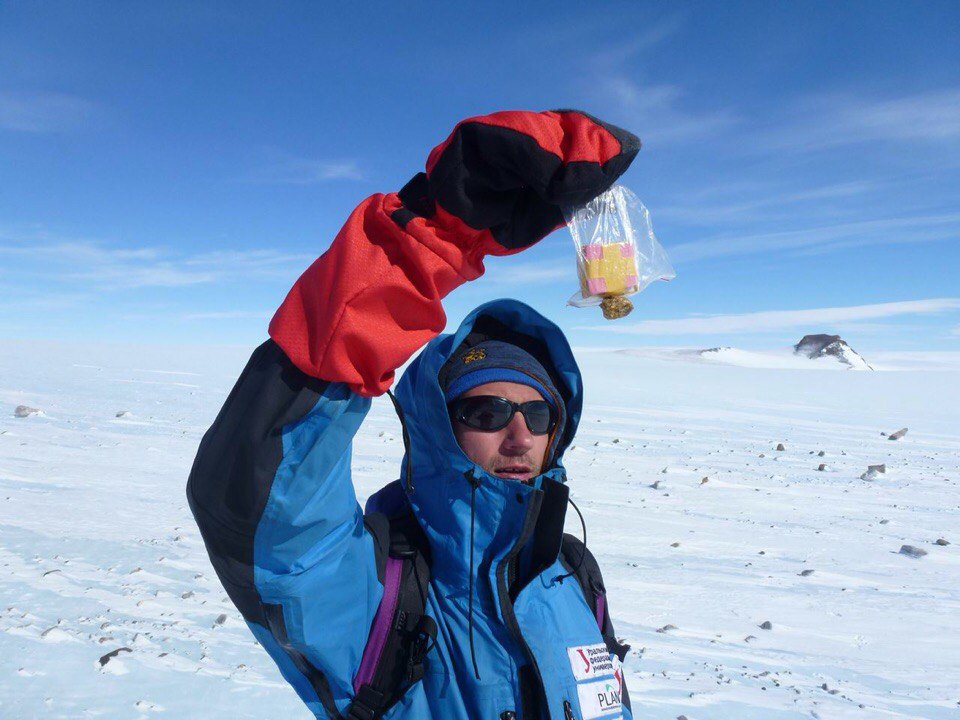 A found rock being tested with a magnet / photo: personal archive of expedition team member 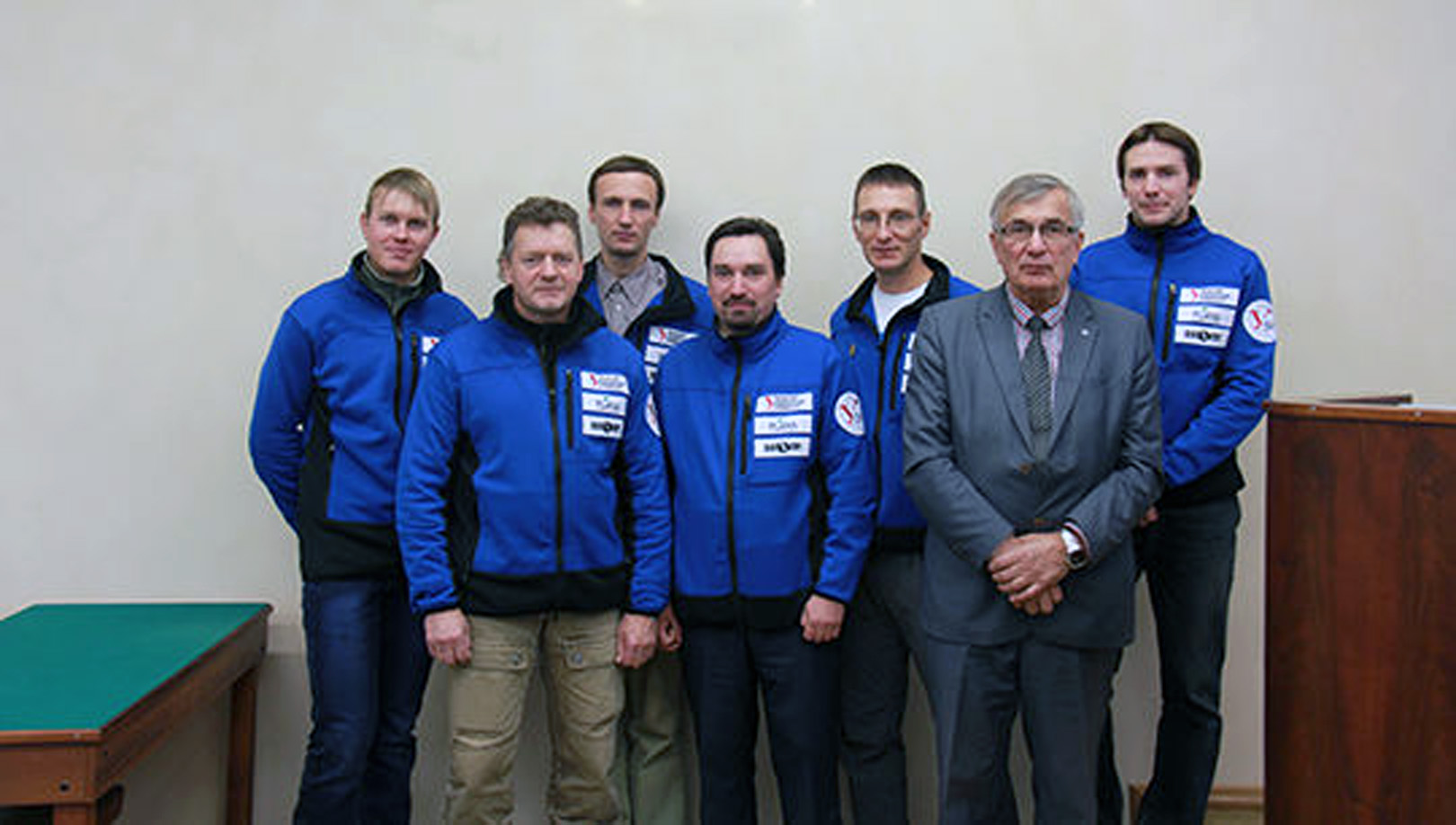 Russian scientists of the Ural Federal University (UrFU), led by Professor Victor Grokhovsky, planned a meteorite search expedition as part of the 61st Russian Antarctic Expedition (RAE). The meteorite search expedition was originally calculated to cost about 184,500 US-dollar (12.8 million rubles). The expedition search team consists of 6 young men, led by Ruslan Kolunin. On October 28, 2015 the expedition gear weighing more than 300 kg was sent from St. Petersburg to Cape Town on board of the ship ‘Academician Fedorov / Академик Федоров’* . The expedition team finished their last training unit and departed from Yekaterinburg’s ‘Koltsovo’ airport on the evening of December 14 to fly, via Moscow and Dubai, to Cape Town, South Africa. After that an Il-76 aircraft transported them 4,200 km further south to the Russian Antarctic Research Station Novolazarevskaya (Станция Новолазаревская) at the coast of Queen Maud Land where they arrived on December 21. On December 22 a Twin Otter aircraft flew the six men of the search team about 150 km inland near the Wohlthat Mountains where they set up camp and tried to start the meteorite search operations on the blue ice. Because of a very unfortunate lack of funds of around 2.6 million rubles the search team had to cut costs and had to do without snowmobiles and with only two satellite phones, with one being used as a modem. Because of the underfunding of the project the meteorite search was only possible within walking distance around the camp site. The team had hoped to find at least 100 meteorites during their two-week search. Because of a period of six days of stormy weather the search operations could not be performed adequately until December 31, except for a short 5-hour search on December 27.

On December 30 the first meteorite was found as reported by UrFU university. The specimen was found by Sergej Malagamba (Сергей Малагамба) and identified as a possible meteorite by Mihail Larionov (Михаил Ларионов) because of ‘structural simlarities’ with meteorites. Two days later (January 1) a meteorite was found by Alexander Pastukhovich (Александр Пастухович). The two meteorites have diameters of about 3 and 5 centimeters. On the morning of January 2, 2016 the team began to work in groups. Using metal detectors one group lead by Alexander Pastukhovich (Александр Пастухович) was looking for iron and stony-iron meteorites, the team lead by Ruslan Kolunin (Руслан Колунин) prepared cut blocks of blue ice, which might contain meteoritic dust grains, to be sent to the Nuclear Physics Institute (PNPI) in St. Petersburg, and a third team continued to look for meteorites. Because of the worsening weather conditions the search operation could only continue until January 5.  The team returned to Yekaterinburg during the night of January 15 to 16. The found meteorites will be shipped to Russia in April. [The meteorite expedition was] made possible thanks to the university’s participation in the state-funded competitive enhancement project 5-100. The scientific supervisor of the project is UrFU professor Victor Grokhovsky, renowned Russian metallographist. The major part of the funds for scientific research was granted by Ural Federal University. Efforts of UrFU Student Union helped to raise 222 000 roubles through crowdfunding; significant amounts have also been provided by the sponsors.” * This year’s first meteorite expedition is meant to be a reconnaissance expedition for future expeditions which require a more sophisticated long-term preparation.

Arrival of 30 kg of Antarctic rocks at Ural Federal University on 15 June, 2016

The team at their arrival at Moscow airport on 15 January, 2016

Mihail Larionov gives details about the expedition. Among other aspects he mentions that magnets can be used to test whether found rocks are indeed meteorites. PLEASE DO NOT USE MAGNETS ON POSSIBLE FINDS! Avoid any remagnetization and corruption of paleomagnetic data because of exposure to strong artificial magnetic fields!